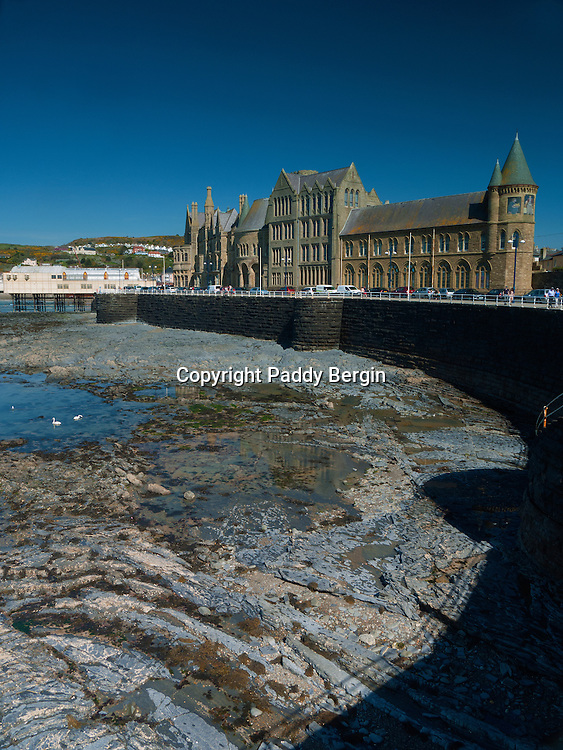 This pristine promenade is one of the longest in Britain at 1.5 miles, located along the breathtaking Aberystwyth seafront. The lamposts are strung with lights, which creates an interesting ambience after dark. Flags of fifty nations line the entire length of this promenade. Various events are held at Aberystwyth Promenade Bandstand throughout the year.

The Royal Pier, Aberystwyth is a pleasure pier located in Aberystwyth, Ceredigion, Wales. The first pier to open in Wales in 1865, after a series of storm attacks, it is now a much shortened version of its originally constructed length of 242 metres (794 ft).

In the health conscious Victorian era, Aberystwyth had developed quickly as a holiday resort. Lying at the centre of the West Wales coastline, with Cardigan Bay beyond, it was billed as the "Biarritz of Wales" Commissioned by a consortium of local business people under the name of the Aberystwyth Pier Promenade Company, the pier was designed and constructed by noted pier-engineer Eugenius Birch, in conjunction with local contractors J. E. Dowson. The structure had iron rod braces, cast iron piles and supporting columns concreted into the rock. Total construction costs were £13,600.

The fanciful Victorian Gothic building doesn’t exactly blend into its seafront surroundings, but Aberystwyth loves it all the same. After a brief spell as a hotel, it became University College Wales in the late 1800s and still belongs to the university today. With its towers, turrets and crenellations, it’s more like a castle than the castle itself.